1. OCEAN ENVIRONMENTS AND BIOTA BEHAVIOUR
In the geological history of Croatia, the oceanic phase persisted from the Early Palaeozoic to the Paleogene, which makes about 400 million years of geological time. Particularly interesting was the period from Carboniferous to Triassic, when a great agglomeration of continents existed (Pangea), which enabled communication and migration of marine organisms in the oceans of Palaeotethys and Panthalassa, and of terrestrial species on the sutured major continent. During that time, the present-day Dinarides built up the passive margin of the Palaeotethys Ocean. Fossiliferous deposits of Early Paleozoic age in Croatia are surficially exposed on a limited area (e.g. Sremac & Mihajlović-Pavlović, 1983; Jerinić et al., 1994) and contain spores, graptolites and marine microfossils.
Late Palaeozoic deposits are better represented. Detailed insights on depositional systems and biota behaviour on the territory of Croatia stem from studies of Carboniferous and Permian deposits of the Palaeotethys Ocean (e.g. Sremac, 1991, 2005, 2012; Vozarova et al., 2009; Fio et al., 2010, 2013; Fio Firi et al., 2016), as well as of deposits formed during the Mesozoic development of the Neotethys (Tethys) Ocean (Vlahović et al., 2005) and its segmentation and flooding of its northern branch on the European and later Asian land during the Oligocene (34 to 23 million years ago) (e.g. Rögl, 1998; Harzhauser & Piller, 2007). During the oceanic phase of geological evolution, large geographical distribution and uniformity of marine flora and fauna has been reported in Croatia and in the wider area, while the behaviour of terrestrial biota differs depending on the integrity of land masses. Cosmopolitan terrestrial flora was recorded from the Carboniferous to the Triassic (Sremac, 2012; Cleal et al., 2015). The post-Jurassic continental break-up lead to isolation of island populations, separate evolution and often stunted growth (dwarfism), especially among large vertebrates (e.g. Dalla Vecchia, 2003, 2009). The good connection of aquatic and terrestrial systems (Carboniferous to Triassic) influenced the synchronized response of biota to stress episodes, which were caused by various catastrophic events during that period.

Intense volcanism (e.g. pyroclastic deposits in the Mt. Velebit area; the Middle–Upper Permian boundary on Mt. Velebit, research planned within this Project; Permian–Triassic boundary, some localities reported by Fio et al., 2010; Fio Firi et al., 2016, while others are planned to be investigated in the frame of this Project, such as the area of Central Dinarides). Pyroclastic deposits contain mineral grains suitable for radiometric dating and determination of their age; hence their finding would enable more accurate geochronological observations of events during these periods.

Transgressive-regressive cycles
Relative sea-level changes during this period were controlled by tectonic processes and climate (Haq & Schutter, 2008). We plan to identify new localities that record transgressive-regressive cycles, especially in the areas of Mt. Velebit and Lika (e.g. glacioeustatic cycles in Late Carboniferous), as well as in Gorski kotar and on Mt. Samoborsko gorje. Triassic transgressive successions in Central Dinarides record gradual recovery of biota, primarily molluscs, and we plan detailed investigations on localities that have not been previously described in geologic literature.

Impacts
Previous studies report features in deposits of Mid-Permian age in the central area of Mt. Velebit that may be attributed to the impact of an extra-terrestrial body (Čalogović et al., 2015). 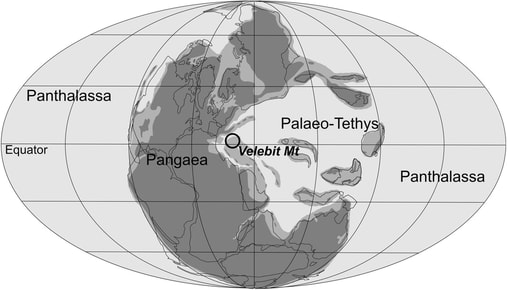 Palaeogeographic image of the world at the transition from Permian to Triassic, with the location of Mt. Velebit marked (Fio et al., 2013).
2. EPICONTINENTAL MARINE BASINS AND BIOTA BEHAVIOUR
Within the framework of the Alpine orogenic cycle, the African plate and microplates from its promontory collided with the Euroasian plate at the end of the Mesozoic and beginning of the Cenozoic era. A series of mountains was uplifted along the collision zone, including the Alps, Dinarides, Carpathians, Hellenides, etc., while the lowlands in their hinterland were “filled” by the northern branch of the Tethys Ocean. This way, the area of northern Croatia was found under the sea and became part of the so-called Central Paratethys.
Climate fluctuations, topography and tectonic activity had major influence on frequent oscillations in relative sea-level, openings and closings of water corridors between seas and oceans, which resulted with the development of several transgressive-regressive cycles in this area (Rögl, 1998; Harzhauser & Piller, 2007; Piller et al., 2007; Kováč et al., 2017, Kováč et al., 2018; Pavelić & Kovačić, 2018). This area had the longest active connection to the Indo-Pacific through the Eastern Paratethys, as well as to the Mediterranean, although the latter is still matter of debate among geologists. The Paratethys was also connected to the North Sea for a short period. Due to frequent environmental changes in space and time, accurate time reconstructions of depositional sequences, boundaries and transgressive-regressive cycles are difficult to make. During intermittent emersions, older rocks and deposits are eroded and the material is transported to form younger deposits elsewhere, making it difficult to define transgressive-regressive cycles. Radiometric dating of minerals in volcanic tuff contributed to a better understanding of the geochronological sequence of events (Marković, 2017).
Throughout the duration of this Project, it is planned to investigate the wider area of northern Croatia, where marine sediments were deposited during the Miocene. Climate changes could also have had a strong impact on biota and its migration. In that respect, particularly interesting is the Middle Miocene period, with the Mid-Miocene Climate Optimum and the Mid-Miocene Climate Transition. Temperature changes were determined by stable isotope analysis of oxygen, included in the skeletons of fossil foraminifera (Repac, 2017).
Miocene deposits of northern Croatia are also important from the aspect of petroleum geology. Within the Croatian part of the Pannonian Basin System, four depressions are differentiated: the Mura, Sava, Drava and Slavonia-Srijem Depression. Conditions for the accumulation and preservation of organic matter which yielded hydrocarbons were optimal during the Miocene (Badenian, Sarmatian, Pannonian); hence the most significant hydrocarbon reservoirs in Croatia are found in these deposits that accumulated in the aforementioned depressions (e.g. Saftić et al., 2003). 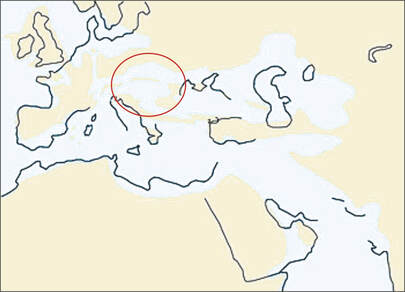 Paleogeography of the Perimediterranean region in the early stage of Paratethys development (about 30 million years ago) (Rögl, 1998). The red circle marks the area of Central Paratethys.

3. LACUSTRINE-TERRESTRIAL BASINS AND BIOTA BEHAVIOUR
Deposits of the lacustrine-terrestrial basin development on the territory of the Republic of Croatia are predominantly of Neogene age. They are best exposed in the area of northern Croatia, where they appear on the surface along with deposits of the marine development, but they were also identified in numerous boreholes. Their development commenced in Early Miocene, when the Pannonian basin was formed by back-arc extension resulting from continental subduction and collision between the European continent and the Apulia plate (Balázs, 2017). Basin development was strongly affected by tectonics and extra-basinal factors such as eustatic and climate changes, while deposits form a large-scale transgressive-regressive cycle. The lacustrine-terrestrial stage represents the beginning and end of this cycle, separated by the marine stage (Pavelić & Kovačić, 2018).
The pre-marine phase was characterized by sediment deposition in an isolated basin and gradual transition from terrestrial to freshwater lacustrine environments, which resulted from increased accommodation generated by basin subsidence and concurrent gradual humidification of subtropical climate (Pavelić, 2003; Mandić et al., 2018). Besides, that period was marked by intense tectonic activity with pronounced volcanism (Pavelić & Kovačić, 2018). Basin isolation resulted with development of endemic species, which are not reliable in stratigraphic calibration of deposits. Therefore, the duration of the pre-marine development stage and the relationship of these deposits with coeval deposits in neighbouring areas, such as freshwater lacustrine basins in the Dinarides, remains unclear and subject of ongoing debates (Jimenéz-Moreno et al., 2009; Mandic et al., 2009; Marković, 2017; Kovačić et al., 2017; Premec-Fuček et al., 2017; Mandic et al., 2018; Pavelić & Kovačić, 2018).
The post-marine, i.e. terrestrial phase of basin development commenced 11.6 million years ago, when the area of the Pannonian basin was isolated from open sea at the transition from Middle to Late Miocene (Piller et al., 2007). Over a period of about 10 million years, the basin was filled with a transgressive-regressive succession of deposits, reaching up to several kilometres in thickness and representing the main source and reservoir rocks in Croatia (Saftić et al., 2003; Troskot Čorbić et al., 2009). The beginning of the succession comprises sediments deposited in the newly formed brackish Pannonian Lake (Pavelić & Kovačić, 2018). This lake initially covered almost the entire area of the Pannonian Basin and was successively filled with sediments supplied by progradational systems from the nearby mountains. Consequently, the lake gradually decreased in size and was finally replaced by alluvial systems by the end of Miocene (Kovačić et al., 2004; Kovačić & Grizelj, 2006; Magyar, 2013). However, at the beginning of Pliocene, a significantly smaller Slavonia Lake was formed along the southern basin margin, but this lake also filled up by the end of the Pliocene, which converted the whole Pannonian basin into a terrestrial environment similar to the one we know today (Mandić et al., 2015). These brackish and freshwater deposits are stratigraphically divided based on endemic fossil assemblage, which poses difficulties to age determination of continental deposits and their correlation within different parts of the basin and with adjacent areas. 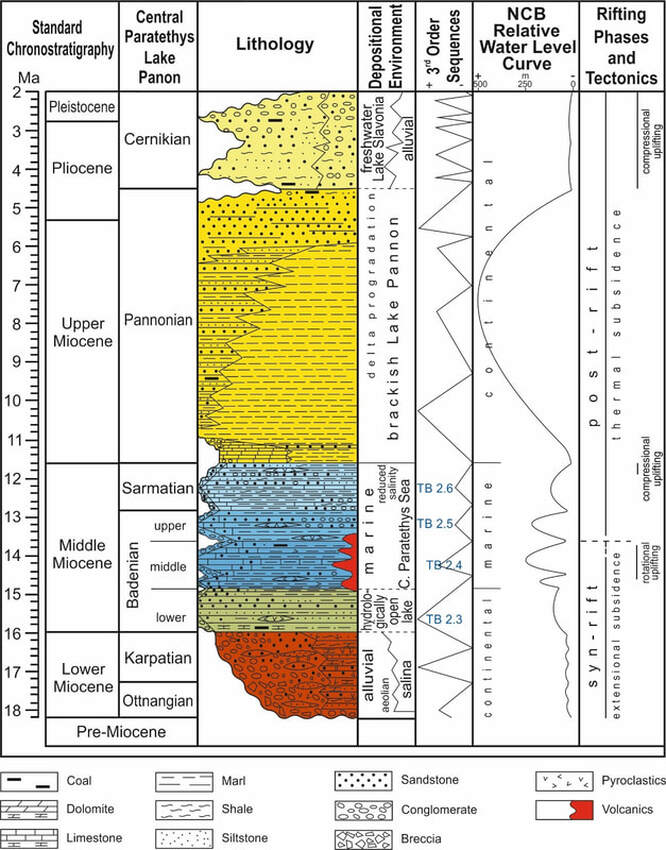 Compiled geological column of Neogene deposits for the area of North Croatian basin. It comprises the whole area of Northern Croatia except for the north-western part, which belongs to the Hrvatsko zagorje basin (from Pavelić & Kovačić, 2018).